Borg: the rise to super-stardom

Bjorn Borg was possibly the most prominent influence behind the casual scene. The five time Wimbledon champion single-handedly launched the Fila range which included the memorable Borg Bj taking the brand to fresh highs.

Bjorn Rune Borg was born on 6th June 1956 in the Swedish capital Stockholm. He revolutionized tennis with his powerful stroke play from the baseline. Borg is widely regarded by observers and other tennis players alike as one of the greatest players and professionals to have graced the sporting world. In total he won 11 grand slam singles titles between 1974 and 1981: 5 at Wimbledon and 6 at the French open.

In his early playing days, Bjorn Borg caught the attention of an important figure and the two of them would go onto change the way that tennis was viewed in popular culture. Fila manager Franchey spotted a young Bjorn playing at a tournament in Monte Carlo and was impressed by what he saw. Franchey wanted to make him Fila’s poster boy and in 1975 the Bjorn Borg and Fila collaboration became a reality.

As a matter of course, Franchey let Pier Luigi Rolando design a completely new, charismatic look for the aspiring youngster. The outcome was the legendary pinstripe polo shirt Borg started wearing in 1976. It soon became the defining look of the 70's. Nowadays it is commonly referred to as the Fila Settanta Mk1 or BB1 Polo shirt. The world became accustomed to seeing Borg winning Grand Slam after Grand Slam wearing the pinstripe polo in white with a navy collar and green button placket. We are now able to offer this polo shirt in various colorways which including classic White with Navy stripes and Red trim.

Fila had a superstar in Borg. After having won Wimbledon in '76 without dropping a set, he was proving to be extremely lucrative for them. Fila saw their profits grow as Borg's presence made markets in Japan and the USA far more accessible to them. Bjorn became a trademark within Fila's empire when the signature Borg BJ line was launched in 1977. The distinctive Borg BJ logo was a significant icon of the 70's (seen above on the BB1 original image).

Borg would always collect his Wimbledon winning trophies wearing the Fila Settanta MK1 track top in red tracksuit (pictured at the top of this page) made from 70% acrylic and 30% wool. We currently stock a large range of MK1 track tops in new amd classic colours Kelly Green is perhaps the most collectable.

After what seemed like a long four years for the next Fila Bjorn Borg BJ track top to be released, the Settanta Mk2 came in 1980-81 (picture below). It was available in numerous colourways: most noteable being Navy-Red, red/white . The stunning Terry MK2 polo was released at the same time and worn by Danny Dyer in Nick Love's The Business. The polo was one of a kind, made from premium terry cloth. 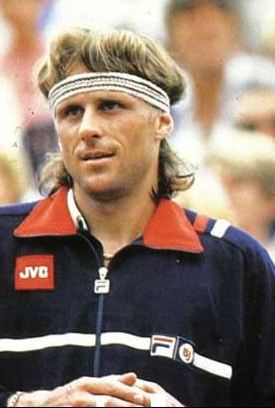 The Fila Terrinda Mk 3 came in 1982 and was the last Fila BJ tracksuit top. It was seen as ahead of its time with its biker style collar and padded shoulder detail. It was highly fashionable, expensive and only worn by an exclusive elite few. The Terrinda became the 80s casual crown jewel, available in five different colour variants. Back then, it was commonly referred to as “The Wham Top”. Andrew Ridgeley of Wham was seen wearing one on various ocassions throughout Wham's rise to success. Original Borg BJ Terrinda's are extremely rare and fetch for astronomical prices on eBay. We are now lucky enough to stock the amazing re release Terrinda in 5 vibrant colours (pictured below).

The Fila Terrinda Borg Mk 3 Polo Shirt is another memorable classic and bridged the gap into football casual fashion. We currently stock two of the terrinda polo designs after its re-launch back in 2009 and only available at www.80scasualclassics.co.uk.

The iconic Borg trainer was the Diadora Borg Elite. It was the ultimate trainer for casuals during the 80s. The Diadora Borg Elite in white/gold, distinctive for their kangaroo leather are reminiscent of Borg's heyday at Wimbledon. They do however come at a premium. So don't be afraid to try the Borg Elite's in white / navy as many casuals did 30 years ago.

Although Bjorn had many years of success through the 70’s and into the early 80’s Fila decided in 1981 that they would begin to phase out the Borg BJ branding. He was rarely seen with his trademark Borg BJ Badge, unless wearing the Terrinda line of 1982. This was the last Fila Borg line and also proved to be extremely popular among much of the casual crowd.

Borg officially retired from the ATP tour in 1983. Although he was still contracted with Fila. it was clear his BJ branding had passed its best and after many years of success together the decision came in 1986 to part ways.